Andrew Jackson at 250: Race, Politics, and Culture in the Age of Jacksonian “Democracy” 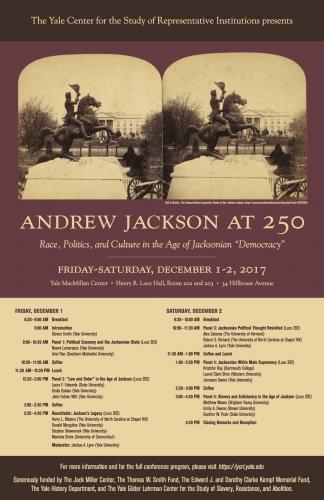 On the 250th anniversary of Andrew Jackson’s birth, the Yale Center for the Study of Representative Institutions (YCRI) invites you to a conference reassessing the “Age of Jackson” and Jacksonian “Democracy.” Join us for two days of panels, with presentations by historians and political scientists, as well as a special roundtable discussion of Andrew Jackson’s legacy:

Andrew Jackson at 250: Race, Politics, and Culture in the Age of Jacksonian “Democracy”

Generously funded by the Jack Miller Center, The Thomas W. Smith Fund, The Edward J. and Dorothy Clarke Kempf Memorial Fund, the Yale History Department, and the Yale Gilder Lehrman Center for the Study of Slavery, Resistance, and Abolition.

For more details on this conference, see a review of the event here: https://macmillan.yale.edu/news/andrew-jackson-250

Naomi Lamoreaux (Yale University): “Fixing the Machine that Would Not Go of Itself: State Constitutional Change and the Creation of an Open Access Social Order in the Jacksonian Era”

Laura F. Edwards (Duke University): “The Hidden World of Governance in Jacksonian America and the Artificial Line Between Legal History and Political History”

John Fabian Witt (Yale University): “Capitalism, Slavery, and the Law in the Age of Jackson”

Alex Zakaras (The University of Vermont): “Nature and the Market in Jacksonian Thought”

Joshua A. Lynn (Yale University): “Race and the Jacksonian Counter-Enlightenment”